The original score by Peter Thomas was caringly reworked and is included as a CD with the Limited Deluxe Mediabook Edition and will soon be available as a limited vinyl edition and digital.

The legendary soundtrack for the classic German horror film "Die Schlangengrube und das Pendel" (English titel "The torture chamber of DR. Sadism"), that has been shaking up audiences from its original release in 1967 on, is being released for the first time ever. It was produced by the recently deceased German film composer Peter Thomas (*01.12.1925 Breslau), who also had been closely involved in the restoration process right up until his death on May 17th 2020. It was important to Thomas, that the audio recordings were carefully and caringly restored and digitalized, in order to make them sound better, than they ever did before.

Thomas, who grew up in Berlin, started playing mostly piano in various Clubs around the city while studying classical music in university. Doing this, he got to know and appreciate the different tastes in music of the occupying forces. In the 1950s he started working in radio before working in film. After that, as they say "the rest was history", as Peter Thomas soon became one of the most successful and in-demand composers in the German-speaking territories. He gained notoriety and an exceptional reputation by contributing his compositions to the "Edgar Wallace" and "Jerry-Cotton" movies, as well as for the TV series RaumpatrouiIlle Orion.

The soundtrack will be available for the first time ever as a limited red vinyl edition and digitally on November 13th, 2020. The product is strictly limited to 500 copies worldwide and is numbered and includes printed inner sleeves. You can pre-order the limited colored vinyl version here. It is also included as a CD with the Limited Deluxe media book edition of the motion picture.

The classic horror film "Die Schlangengrube und das Pendel" (English titel "The torture chamber of DR. Sadism") by Winnetou and Edgar Wallace director Harald Reinl has been released in a newly HD-scanned and restored version, elaborately resampled as a mediabook and as a strictly limited deluxe collector's edition. In addition to the film on Blu-ray and DVD, the elaborately designed mediabook contains exclusive bonus material consisting of a 36-page booklet, an audio commentary and a slideshow about the restoration of the film.

For those who are not familiar with the plot, it centers around the protagonist Count Regula (Christopher Lee), who is sentenced to death and quartered for the murder of twelve virgins. Before the sentence is carried out, however, he vows revenge on his judge and his descendants. Many years later Roger Mont-Elise (Lex Barker) and the attractive Baroness Lilian of Brabant (Karin Dor) receive a mysterious invitation to the disreputable Sander Valley. The journey through haunted forests leads them directly to the ruins of Count Regula's castle and its torture chamber. They do not suspect that the count's resurrection is being prepared here, but for this he still needs the blood of a thirteenth virgin...

You can watch the trailer for the movie below:

The movie is available as of today. You can get the fully restored movie as the Limited Mediabook Version here and and as Standard version here. 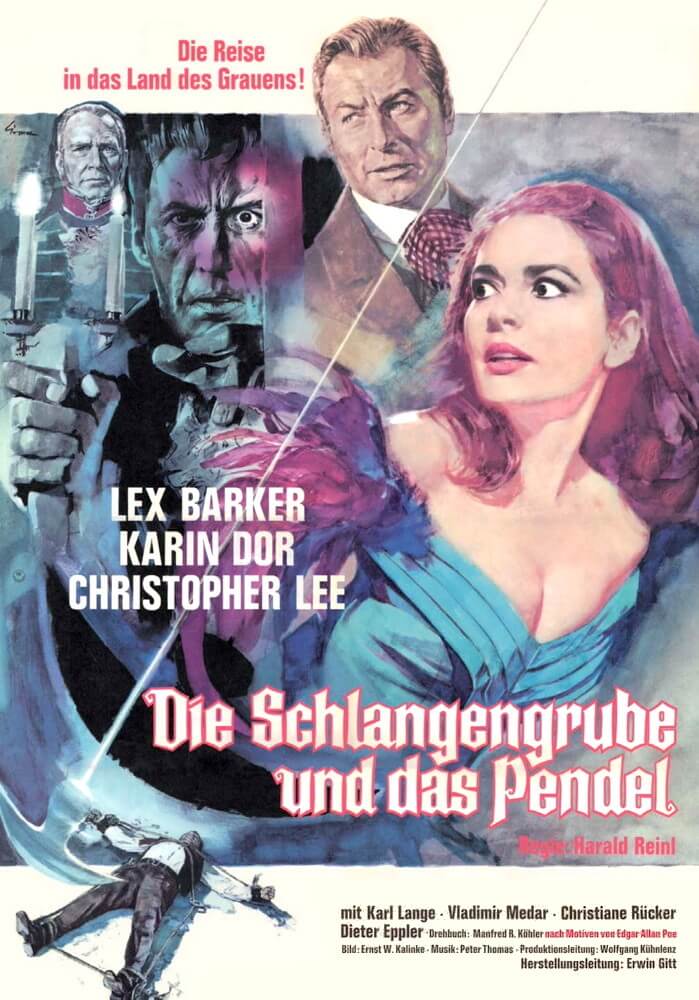